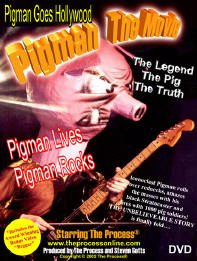 PIGMAN
Lots of people have asked me over time, "Whats the deal with Pigman"? So I thought I'd set the record straight.
"Pigman" was an old pig farmer that lived on a desolate stretch of local backroad near our hometown.
He was always surrounded by a pack of barking dogs, everywhere he went, which was only up and down the road.
Pigman lived without electricity or running water, in an old trailer in front of his pigpens.
Local rednecks from the town tormented Pigman by shooting his pigs from across the river with bows and arrows, driving by his house at all hours honking their horns and by stealing his pigs to roast.
"Pigman" eventually died...he was found dead in his trailer by a neighbor. When they did the autopsy, they had to actually cut the socks off of his feet...Despite this, we're sure there was still a spot for him in "Pigman Heaven".

There is an actual story, told by our friend Art Howse which inspired the song, and it goes like this:
Corky Legue's old man went on down to Pigman's farm to buy a little pig, and took Corky along.
Pigman had some pigs in that pen that weighed over a thousand pounds, and he never trimmed their eye-teeth, so they
grew up, like the tusks on wild boars.
Pigs are meat-eaters. They'll gind you up, bones and all...a pig'll eat ya, bones and all. A pig'll eat ya, bones and all.
Pigs are smart, too...and they stick together. If you take one pig, you've gotta take 'em all.
Pigman reached down into the pen and pulled up a squealing little baby pig by its tail and said, "They don't steal many pigs around here, Corky Legue," ...and a hundred pig-soldiers come up out of the mud... a hundred pig-soldiers come up outta the mud and they started batterin' down that ol' pigpen...they started batterin' down them old pallets...they were comin'...comin' for Corky Legue...

CLICK HERE to buy the DVD "PIGMAN THE MOVIE".

CLICK HERE to watch it online (lo-res) .
Posted by The Process at 8:02 PM No comments:

New CD by THE PROCESS out soon! 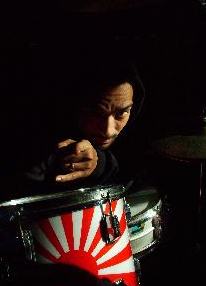 The new album by THE PROCESS, "WEAPONS OF MASS PERCUSSION" is due to be released in early 2006. Recorded and mixed at U Be U Production House with mixdown master Gee Pierce, the new CD breaks brave new ground in the worlds of Remix and Dub Music. Featuring 9 new mixes from THE PROCESS and Gee Pierce, the CD also features mixes by several other producers including THE PROCESS drummer P-Funk All Star Gabe Gonzalez. Get ready to travel to uncharted sonic territory: WEAPONS OF MASS PERCUSSION in early 2006!
Gabe Gonzalez: Photo by Steven Gotts
Posted by The Process at 4:33 PM No comments:

THE PROCESS at The Independant Artists Company 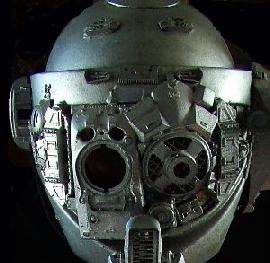 THE PROCESS is now featured on The Independant Artists Company website.

THE PROCESS is featuring the title track from the new CD by THE PROCESS, "WEAPONS OF MASS PERCUSSION", due to be released in the next few months! This sonic assault presents a chilling case for those who believe our goverment is involved in deception and mass mind washing.

Click here to visit THE PROCESS page on the site.

Posted by The Process at 7:58 AM No comments: