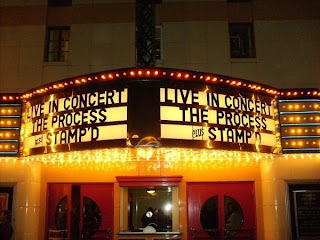 I would like to personally extend a heartfelt thanks to everyone who helped to make last Saturdays show at the Vassar Theater a success. Special thanks to Bissonette Sound, Seth Payton and Stamp'd, Chuck Harrington, Aaron Lenk, Tim James, Lavel Jackson for recording the show and Gary Bredow with Big Bang Films. Also a huge thank you to Tim O'Brian at the Vassar Theater for all his unflinching support. I also would like to extend my love to my Brothers-In-Arms in THE PROCESS, Garrick, Bill and Gabe. To all of our friends, fans and family who made it out to the show, your support meant more to us than you could ever know. Much love to everyone, David
Posted by The Process at 7:31 AM No comments: 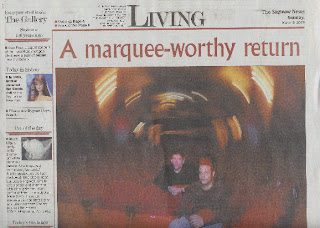 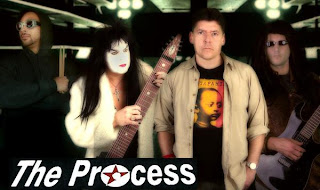 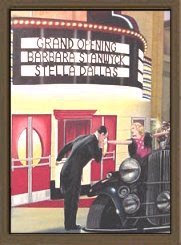 Tim O'Brien and The Process Roll Out the Red Carpet at THE VASSAR THEATRE.
REVIEW MAGAZINE
By Robert E. Martin, Photos by Rick Moreau, Band Photo: Gotts
As an aficionado of film, beauty, and the miraculous synthesis that occurs upon the silver screen when a film is viewed by a community within the wondrous walls of a restored movie palace, as opposed to the drab concrete walls of a multiplex, Tim O'Brien is decidedly in a class all his own.
A former owner of The State Theatre in Bay City and Green Acres Cinema in Saginaw, O'Brien purchased The Vassar Theatre back in 1990 with a dream of restoring it to its former glory.
After investing over $500,000 and well over 13 years of his life, O'Brien executed the restoration almost single-handedly and re-opened the theatre in November 2005, where it continues to run feature films weekly.
O'Brien believes that where you see a film is as important as the movie itself and apart from the restoration, he has seen that the venue is equipped with professional 35 mm film projection and premium Dolby Digital sound enhanced by four 18 inch JBL subwoofers and 14 surround speakers.
On Saturday, March 22nd, O'Brien will be hosting a different type of entertainment at the restored venue when he brings fellow Vassarites The Process into the theatre for a Live Concert at 7:00 PM with special guests Stamp'd for an 'all ages' show.
The Process will be filming their next live DVD 'Urban Guerrillas' at the venue and encourage everyone to become a part of history and experience the unique fusion of a 'Rock Reggae Implosion' and laser light show within the walls of this historic venue.
Recently I caught up with both Tim O'Brien and The Process' David Asher to discuss the significance of this unique fusion of performer, venue, and artistic vision.
Review: Having realized your dream of restoring such a grand old Dame' of a building to its original splendor, what does it feel like to walk through the doors each day?
O'Brien: I've been walking through these same doors for seventeen years during which time I've worn many different hats. At times I've been the designer/architect, carpenter, electrician, plumber, booth technician, dry waller and much more.
I'm now consumed with the day-to-day operations of the theatre, which doesn't leave much time to continue the restoration details that still need be addressed. When I walk through the doors on any give day, I see more work than time will allow. Of course at this point, I'd rather be selling movie tickets than sanding drywall.
Review: What's it feel like doing this show in your hometown of Vassar in this restored jewel of a theatre?
Asher: Well it is a dream venue. Tim O'Brien is a very determined man who made it his project to restore the theater over more than a dozen years. This is our first show in our hometown since our last show there in 1991. Bill Heffelfinger, Garrick Owen and I all are originally from Vassar. We have lots of friends and family I hope make it out to the show from all over!

THE PROCESS IN THE METRO TIMES 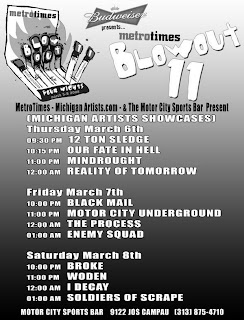 Posted by The Process at 6:51 PM No comments: