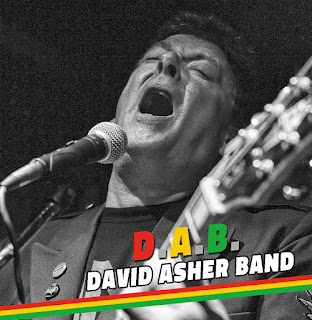 Through the dedicated focus of persistence and a prism of creativity that is perhaps best described as a gift from the Heavens, musician and songwriter David Asher has achieved a new level of excellence with the highly anticipated debut release of new material from D.A.B (David Asher Band).

Recorded by Christopher Lewis at Fire Hyena Studios and with several tracks mixed by the legendary British producer Adrian Sherwood from On U Sound Studios, who recorded & mixed ground-breaking music from bands such as Nine Inch Nails, Ministry and Depeche Mode; along with reggae giants such as Lee ‘Scratch’ Perry, the nine album tracks and two bonus CD tracks showcased on this debut mark a breathtaking departure for Asher, who over the last three decades has pioneered an impressive recording & performing career with the innovative fusion of Reggae & Rock achieved through his former band The Process.

Each of the tracks on this new D.A.B. album resonate with a creative brilliance that while firmly grounded in the roots of traditional reggae, flourish in explosive geysers of compositional creativity that merge the boundaries of R&B, Soul, and popular music in a manner that is totally unique and authentic. Indeed, when asked about the shimmering creative brilliance displayed on each of these tracks, Asher chalks it up to the fact that “I felt the fire burning over me and had to pay attention.”

With Asher on guitars, lead vocals, and piano; the brilliant David Ivory handling much of the lead guitar work; Derrick Davis masterfully handling drum & percussion duties; and William Petzold keeping tight control of the bottom end on bass, Asher says the magic of his new sound is truly a collaborative effort.

“The overall sound says more about the power and talents of the group than anything,” Asher humbly states, “and full credit needs to be given to the late Seth Payton for giving me the push to get out of my uncomfortable comfort zone with The Process and forge ahead with something new.  Seth and I had an unusual relationship as brothers, father & son, teacher & student, and those hats would switch. I was older and had more life experience, but Seth had a lot of innate wisdom. He was a special soul.”

Consisting of five original compositions and four covers, Asher says the entire album happened very organically. “We planned on doing a cover album and I hadn’t written much in quite some time, but then I got bit by the writing bug and we decided to mesh the originals with the covers. As Jah intended, the project happened the way it was supposed to happen and all of a sudden inspiration fell into my lap.

Opening with an upbeat translation of the Curtis Mayfield song Keep on Moving, which in many ways sets the tone for the album; the vibe branches out further on the following track Give a Hand, which features Mike Cooper on lap-steel guitar. Similarly, the DAB band’s rendition of Bob Dylan’s classic, Knockin on Heaven’s Door, is probably one of the most definitive treatments of that song I’ve ever heard, with the reggae-influenced rhythmic foundation propelling the dynamics as Ivory lays out a shimmering guitar solo that takes one straight to the heavens.

But without doubt, to this reviewer’s mind, the standout tracks on this debut release are the four originals: 47 Shots (the Ballad of Milton Hall), Deputy Dawg & the Marshall, Keep a Little Faith, and the standout heat of There’s a Fire.

47 Shots is a timely and tightly constructed modern-day anthem about the shooting of Milton Hall by Saginaw police officers who fired 47 shots into a mentally disturbed black man who couldn’t afford to pay for a cup of coffee.  Featuring stellar brass orchestrations by Nicholas Pena on trumpets, flugelhorns, baritone & tenor saxes, the power of its narrative is derived from the facts of this sad incident itself, which crescendo and build by the accompanying musical articulation.

In a similar vein, Deputy Dawg & the Marshall recounts the factual story of an incident involving the STP Family commune in Colorado who were ambushed and killed by federal Marshalls. Co-written by William Petzold, Asher notes that “Bill helped me write this song because he has a journalist’s way of taking information and relating it succinctly lyrically.”  Indeed, already this track is getting airplay on radio stations in the Portland area.

Donkey Jawbone is another original that was originally recorded by The Process back in 1992 on the Baldhead Vex album, which was one of their more obscure releases.  Asher never thought the song was given justice, so re-recorded it with the DAB Band and mixed it at the On-U-Sound studios in Ramsgate, England, which enriches the track with greater nuance.

Closing out the album is an utterly beautiful and breathtaking version of the Soul and R&B classic Love Ballad, written by Skip Scarborough and also mixed at On-U-Sound.  The emotive power of Asher’s vocals are rich and full and buoyed tremendously by the vocal accompaniment of Mikki Sounds, who balances the weight of Asher’s voice with her own incredible vocal stylizations.

What is most striking about this debut release, however, is the way Asher and the DAB Band have taken the idiom of reggae music, which is decidedly a specialized niche market, and translated its core elements into a commercially accessible context without compromising the integrity of the material.

For that reason alone, it stands as one of the best releases I’ve heard in this year of 2020.

DAB • David Asher Band is currently available in pre-release form and Asher will be doing a Pre-Release Party at Audiogazing record shop in Saginaw on November 28th from 2:00 - 4:00 PM. The album will be released on vinyl, CD, and flash drive on New Year’s Day and pre-orders are currently available online (with one additional song) by visiting Bandcamp or the DAB Band facebook page, or search the DAB Band on google.

Posted by The Process at 3:54 PM No comments:

DAB is the new Roots Reggae band formed by David Asher, the former front-man/songwriter for the legendary Detroit Reggae Rock group THE PROCESS.. The David Asher Band is the culmination of years honing the sounds and soul of island music that has been embraced by music fans across the globe for decades. Asher has worked with numerous Reggae Legends over the years including Adrian Sherwood, Dub producer The Scientist, Lee Scratch Perry, Little Axe and many other musical luminaries. DAB's new album features two mixes done at On-U Sound studios in England, and the CD includes two additional bonus tracks mixed by Adrian Sherwood.

Drums - Derrick L. Davis - A superb timekeeper who performed for years in the Atlanta reggae scene before joining DAB. 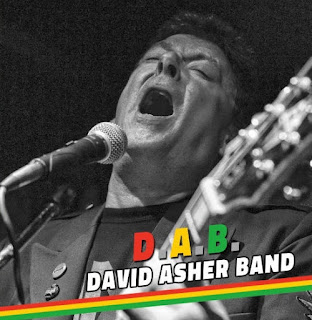 So it's official, the new album from DAB (David Asher Band), will be released world-wide on New Years Day 2021, on Vinyl, CD and Flash Drive. David Asher will be doing an in-store DJ set, and selling pre-release copies of the album on Saturday November 28th, at Audiogazing, 200 S Michigan Ave, Saginaw, MI 48602, at 2:00 to 4:00 PM. David will be spinning tracks from the new album, along with music from THE PROCESS, and new releases from ON.U Sound Records. Be sure to catch this very special in-store pre-release event, and secure yourself a copy of DAB (David Asher band)!

Posted by The Process at 7:49 AM No comments: