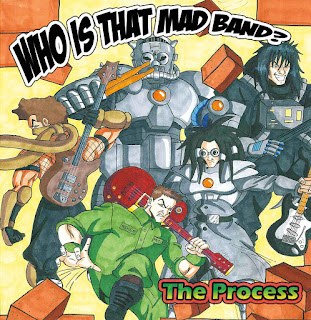 The album, entitled "Who Is That Mad Band?", features a stunning array of guest artists, including one of the final recordings of the late legendary rock guitarist Dick Wagner (Alice Cooper, Lou Reed), as well as Dub music Legend Adrian Sherwood, UK Vocalist Ghetto Priest, former Asian Dub Foundation MC Lord Kimo, Dub/Blues artist Skip McDonald aka Little Axe, Electronic music Producer David Harrow and the voice of Dub Reggae Legend Lee "Scratch" Perry . Over five years in the making, the album captures THE PROCESS delivering it's most diverse and cohesive statement yet, fusing Reggae, Rock and World Music into a seamless aural experience, sure to please long-time fans of the band, as well as the uninitiated. The CD will be released in July, 2016, so do yourself a favor, and find out WHO IS THAT MAD BAND? GET PROCESSED!
-----------------------------------------

Join THE PROCESS for two album release events in July.

Posted by The Process at 6:43 AM No comments: