VASSAR – Rock reggae’s madmen, The Process, are celebrating their 20th anniversary this year and part of that celebration is a rare appearance in their hometown of Vassar.
The show is set for Saturday, Jan. 15, at The Vassar Bar, 120 E. Huron Ave. The cost of a ticket is $5.

“We are really looking forward to seeing our friends and family at the Vassar show,” said David Asher, who heads up the group. “It’s been three years since we’ve been back. It will be fun.”

During his 20 years, the band has released an impressive catalog of music beginning with “Mystery Babylon”, “Bald Head Vex”, and “Craven Dog”.

According to critics, the group’s music is groundbreaking, an innovative fusion of rock, reggae and metal. Some of the songs from these releases have become instant classics and fan favorites.
The Process was formed in 1989 by Asher, the group’s vocalist, with Garrick Owen on guitar, and Bill Heffelfinger on bass. Gabe Gonzalez, formerly of George Clinton’s P-Funk All-Stars, now completes the group on drums.

The group has performed in New York, Los Angeles and Chicago.
“Our concerts include the use of lasers, props, costumes, theatrics,” Asher explained. “Our awe- inspiring finale of Pigman is legendary.”
The band was recognized as Outstanding Reggae Group in the Detroit Music Awards in 2007.

They are currently working with producer Adrian Sherwood.
Sherwood is best known for his incredible live shows with his On-U Sound Record label, Asher said. Sherwood has produced Nine Inch Nails, Depeche Mode, The Cure, Skinny Puppy, Ministry, Dub Syndicate, Lee ‘Scratch’ Perry, Tackhead, Ari Up of the Slits, and phenomenal Jamaican artists Prince Far I, Mikey Dread and Bim Sherman, among others.
The group will release “The Process Meets Ghetto Priest, The Lion of Judah Hath Prevailed,” this coming spring. The CD was recorded in London, Los Angeles and Michigan.

You can also check out their website at www.theprocessonline.com, or www.myspace.com/theprocessmusic.

Posted by The Process at 4:22 PM No comments: 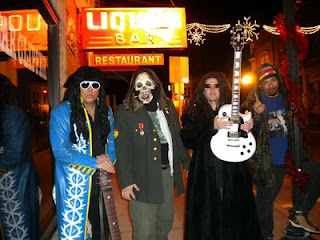