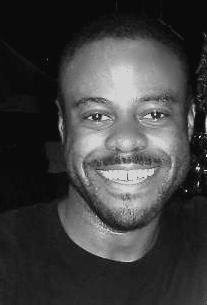 THE PROCESS family sends our heartfelt sympathy out to the family of Andre Smith. Andre was a gifted man of God and a dear friend to THE PROCESS.
He performed with the band live and played guitar, keyboards and backing vocals on our releases CRAVEN DOG and WEAPONS OF MASS PERCUSSION.
As a member of the UBEU Production team, Andre was a talented studio engineer and arranger. Most of all he was a great friend with a beautiful spirit and a smile that could make your day. We will miss him being in this world. Thank you Andre, your work here is over, fly away home.
Posted by The Process at 6:12 PM No comments: 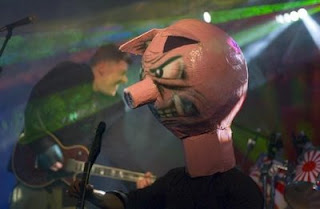 If there was a retro feel to The Process' standing-room-only show last March at the historic Vassar Theatre, it was totally by design.
The Pigman -- guitarist Garrick Owen in an oversized pig head -- returned to the stage, as did the Skullman, the embodiment of a 1,000-year-old Ethiopian holy man.

And the journey continues in a DVD that captures the experience in its multi-media entirety. Catch it Saturday, Nov. 29, at the official DVD release party at Indian Barry's in Bay City. Also performing are the band KMJ and Born.

''It is a very theatrical production,'' Asher said of the homecoming concert on the stage the band first played in the early 1990s. ''We wanted to bring back the feel of, say, Alice Cooper or Peter Gabriel.''

That comes across in full fury, falling just short of aroma-vision in its riveting blast of lasers, vintage film and rolling banks of smoke. Gary Bredow, Lavel Jackson and Art Bissonette worked behind the scenes, he added, to pull it all together.

''We had to bring our own stage in, so we were there at 9 in the morning, and we were working until 2 in the morning tearing it down,'' Asher said. ''But to see how it looked from the audience, that's always a kick. A little weird the first time, watching yourself on a big screen, but then I was more relaxed about it.

''It captured us chronologically; it documented the event.''

And that's the one criticism. While the live segments are professional in every sense of the word -- this is the crew behind the documentary ''High Tech Soul'' -- there's an awkward transition between songs.

''Some wanted to baby-sit the filmmakers through the process but I say to let them do what they know how to do best,'' Asher said. ''We could have tinkered with it, but I don't know if that would have made it better.

''The word is getting out on the DVD -- it's available on CD Baby or on our Web site www.myspace.com/theprocessmusic -- and everything we're hearing is very positive. It's good.''
Posted by The Process at 12:17 PM No comments:

REVIEW OF THE PROCESS LIVE DVD AT THREE MILE SPIRAL

New on DVD: The Synesthetic Madness of The Process

“We’ve been possessed by this otherworldly soul that this band has.
It pulls us along. It’s got a spirit of its own; beyond us.”

–Dave Asher, discussing his band, The Process,
during a 2001 radio interview by Marc Beaudin
(CAGE Sessions – On the Air, WUCX 90.1 FM)

It’s been a lot of years, a lot of shows, a lot of recordings, since I first saw The Process perform in a mid-Michigan bar back in the late-late 80’s. But what immediately hooked me at that initial show is just as evident today: These guys mean what they play. They mean every note, every word, every drumbeat and guitar riff. They mean every ounce of muscle and soul that they freely spend each moment that they are on stage.

To be in the audience at one of The Process’ shows, is to have your mind, heart, and body taken apart and put back together in a slightly better way. Your senses merge and you see the music; hear the lights bouncing off the walls; taste the moment.

The next best thing to being there in the flesh (and soul) has recently been released on DVD: The Process: Live at the Vassar Theater.

First of all, I want to commend the seldom-thanked in the music business – the folks behind the scenes of this production. The technical aspects of this release are extraordinary. From the direction of Gary Bredow, to the live mix by Art Bissonette, the live recording by Lavel Jackson, the camera work by Bredow and Per Franchell, the lighting and sound by Bissonette Sound, the filming and editing by Big Bang Films, the cover art by Steven Gotts, the photography by Rick Morrow, and the production assistance by Tim O’Brian, Chuck Harrington and Seth Payton; every part builds perfectly to a Whole, which provides the optimum showcase for the talents of the band.

And what a band. This recording offers a seamless sound and energy created by four people who, by all indication, share a common soul. With David Asher on vocals and guitar, Garrick Owen on lead guitar, Bill Heffelfinger on bass, keyboards, programming and backing vocals, and Gabe Gonzalez on drums; they are, individually and as a group, at the top of their form. Mature and consummate musicians who’ve lost none of the edge and passion of their younger days.

The DVD consists of a concert of 10 songs, old favorites and new gems both, and it kicks off in signature Process style: a blaze of lighting and fog effects through which bleeds their hopped-up rendition of Wendy Carlos’ haunting and exhilarating “Title Music to A Clockwork Orange.” Glimpses of the musicians are seen in ultraviolent flashes of light. The relentless drumming; like a jet engine preparing for take-off. The tension builds.

And just when you are about to either rush the stage or run like hell, the music breaks into “Blood Runnings” from Craven Dog. A man appears with a skull for a head and covered in a brilliant Rasta robe, like an ancient, long-dead Ethiopian King. He stares into the audience – into and through each person – and now it’s clear: there’s no turning back. The concert has begun.

Song after song, culled from the vast library of Process material, is expertly and whole-heartedly presented. The evolution of each is remarkable, and it seems that their original studio versions were blueprints, and these are the fully-realized structures: architectural masterpieces; holy temples and towers of defiance against all negative forces – all evildoers, downpressers, and craven dogs. The songs are history lessons, incantations, and calls to revolution – danceable social justice and rockin’ revelations. The musicians push their instruments beyond the boundaries defined by standard rock or reggae. They’ve fused these along with funk, rap, and jazz, and raised up a new entity – something that can only be described as “Processian.”

My only issue with this DVD is that the transitions from song to song could be smoother. I would prefer if the camera were kept rolling to capture the incidental material between numbers – to give us more of a live concert feel, and more of a glimpse into the personalities of the band. But this is a small complaint that is quickly forgotten once each song kicks in.

And so are you.

Visit Marcs' Blog: THE THREE MILE SPIRAL
Posted by The Process at 3:19 PM No comments: 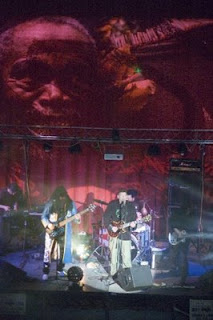 With the possible exception of the wedding band Ceyx, no other musical outfit in the tri-cities have remained as intact as the Vassar-based reggae/rock warriors known as The Process. And being essentially an all-original group, writing and performing their own material while pursuing a very defined musical & cultural vision, this is a band of brothers that truly is in a league of their own.

On a cold and grey March evening earlier this year, The Process booked the beautiful Vassar Theater to perform a sold-out concert showcasing the broad yet precise expansiveness of their music, which served as the perfect setting for a live concert video recording of the 70-minute set.

Entitled The Process – Live @ Vassar Theater and produced by Big Bang Films & the Process, from the opening musical swell of Blood Running to the re-focused delivery of what has become their 'signature' song, Pigman, this is undoubtedly one of the best recorded and professionally edited video releases to hit the market in recent memory.

Directed by Gary Bredow for Big Bang Films with sound & lighting and a live mix courtesy of Art Bissonette from Bissonette Sound, the live recording techniques employed by Lavel Jackson for Mobile Studios set a landmark for the way videos should be filmed, with plenty of tight shots and a focus upon the stage (as opposed to the audience, which often detracts from most concert films).

David Asher's vocal strength has solidified over the years and the flow of his writing grown deeper with age, while guitarist Garrick Owen achieves new levels of sonic accuracy. With the estimable skills of bassist/keyboardist and programming genius Bill Heffelfinger and all group energy focused through drummer Gabe Gonzalez' relentless attack, this DVD does what a concert video is supposed to – frame the accomplishments of the group into a context is not only memorable, but chronicled for posterity.

The Process will be holding a special DVD Release Party with a performance at Indian Barry's on Saturday, November 29th. Copies of The Process LIVE: The Vassar Theater can also be obtained by going to their website at www.myspace.com/theprocessmusic
Posted by The Process at 5:54 AM No comments:

...The ultimate Process Live Concert Experience!
THE PROCESS® Live In Concert at the historic Vassar Theater. The DVD features blazing performances of some of the groups best known songs, as well as a spectacular film and laser light show. If you love the band, or even if you have never seen them live, this DVD documents what the buzz is all about.
A must have!...
Posted by The Process at 2:48 PM No comments:

First Review of the Live DVD!

One of the best things about The Process Live: The Vassar Theatre, I think, is the fact that I didn't have to drive all the way to Vassar, MI to see it. That's right. Thanks to the wisdom of The Process and the fine production work of Big Bang Films the entire show was captured and released on DVD for you - and lazy local music dorks like me who rarely leave the cave anymore. But why spend the gas money when I can watch it from my couch?

Click "read more" below for a short review and all the relevant links.
Posted by The Process at 7:28 AM No comments: