Posted by The Process at 4:08 PM No comments: 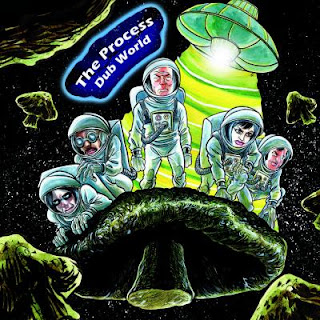 The new release by contemporary Reggae advocate, ambassador, songwriter, and innovative producer David Asher is titled Dub World -  an engaging remix of stellar tracks cultivated from his last groundbreaking 2016 outing Who Is That Mad Band? with The PROCESS.
Consisting of 11 tracks and produced by The Process and Chris Lewis, with additional production courtesy of On U Sound legends Adrian Sherwood, Skip McDonald and David Harrow, the remixes on Dub World unveil like a tapestry of hypnotic tonal, rhythmic, and electronic clarity that shimmers with strong melodic musical hooks and shines like freshly minted coins embedded with fresh musical re-invention.
With nine albums and CD’s under their belt and numerous remixes, as the CD has fallen by the wayside in recent years, Asher’s new approach to recording is to focus upon releasing fresh singles to keep the band constantly churning in the in the stream of commerce with fresh material; but given that Mad Band took seven years to record, mix and release – which was time well spent insofar as it is hands-down the group’s most accomplished and accessible work – the genesis for Dub World started right after the release of Mad Band two years ago.
“We didn’t want to take a break,” states Asher, “and saved all the balance and EQ settings from that album, so we could strip the mixes back and add effects and whatever else we chose to do to make the tracks unique.  That’s what Dub Mixing is all about.”
Consequently, the track titled Interstellar Medium, which features the late great Dick Wagner, is a radically remixed version of the track that appeared on Mad Band, as Asher was able to take the rhythm tracks and strip back effects in the original mix and add additional plug-ins and effects, as opposed to musical hardware on the project.  “Basically because everything was recorded digitial, we are able to move parts of the song around because we can,” Asher explains.
“The whole purpose for Dub Releases is to present an alternate version of the song that exists in a parallel universe,” he continues. “I’ve always admired Jamaican music and remixes are a big part of it. People like legendary Jamaican producer Lee ‘Scratch’ Perry are always screwing around with the sound, so what I wanted to do with Dub World is create more of a futuristic album with a futuristic sound.”
The initial reaction has been quite good and Asher says both the new Dub World and Who Is That Mad Band? Have both been selling well online and at live shows performed with his latest project. The DAB Band. “I did a limited run of Dub World to test the waters but sold so many the first day of its release both online, and later at shows, that I need to press a few more.”
It’s been a busy summer for Asher and his new more traditionally oriented reggae outfit, The DAB Band, but not one is rest upon his laurels, Asher is already busy at work writing new material for his latest project. “We played shows every weekend this summer and are playing Grand Rapids this weekend, but after that we’re going to take a little time off,” he explains. “I’m resurrecting The PROCESS for a Halloween show in Detroit, but the DAB Band has been going at it so hard that we need to slow down for a minute. Right now, I’m in the studio with Mikki Sound and she and I are working on a concept album that will feature some of my favorite Jamaican songs and sounds that have never hit the United States. But all these projects take time. Mad Band we started back in 2009 and it took 7 years go release, but I knew we could get Dub World done quickly if we applied ourselves, which is what we did.”
Consisting of David Asher on vocals, guitars, bass, keyboards, drums & percussion; Garrick Owen on guitars; Bill Heffelfinger on guitars, bass, keyboards, drums & programming; Gabe Gonzalez on drums & backing vocals; and Seth Payton on bass, keyboards, guitars, percussion, backing vocals & horn arrangements, additional musicians on Dub World include backing vocalists Mikki Sound, Michelle Shaw, Faith Gateway, Maria Rose; percussionists Earl ‘the Squirrel’ and Derrick Davis; and horns courtesy of John Rickert, Matt Wickie & Dennis Lewandowski.  Additional guitarists include David Ivory, Pete Metropoulos; with additional programming provided by Skip McDonald.

Both Dub World and Who Is That Mad Band? can be purchased at Records & Tape Galore in Saginaw and online by visiting I-Tunes, CD Baby and Amazon.com.
Posted by The Process at 5:32 AM No comments:

Interview with THE PROCESS vocalist David Asher on
Detroit Riot 10/03/17 on  TapDetroit.com at 22:35.
Asher discusses working with the many legendary artists involved in the making of "Who Is That Mad Band?" and "Dub World", including Adrian Sherwood, Little Axe, Ghetto Priest,
Lee "Scratch" Perry, Dick Wagner and others.
Click here to listen!
Posted by The Process at 5:41 AM No comments: