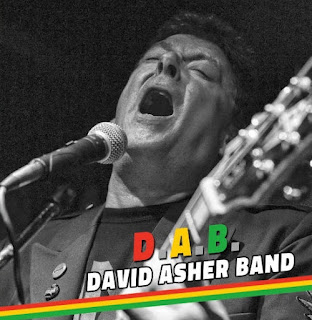 David Asher Band - D.A.B.
At first I had this crew confused with the Daniel Asher Band, a reggae outfit from Sweden. But no, David Asher is based in Michigan, was once the front man of a reggae rock band called The Process and now heads the group that bears his name. Their debut release is an impressive slab of reggae with rock, funk, Latin and country overtones. Asher is adept on numerous instruments and has a husky, unencumbered voice that serves handily on covers of “Keep on Moving” and “Knockin’ on Heaven’s Door “ as well as his own hard-hitting material. The latter includes fact-based musical tales of law enforcement gone frighteningly awry (“47 Shots,” “Deputy Dawg and the Marshall”) and songs like “Keep a Little Faith” that hold true to the easygoing steadfastness that has always been one of reggae’s defining features. There’s also a pair of tracks with corresponding dubs- “Donkey Jawbone” and “Love Ballad” -that were mixed by On.U Sound mastermind Adrian Sherwood and deliver the level of mysticism and measured sonic thrills one would expect from that crafty Brit. It’s always good to come across reggae from my sizable American homeland that has the right balance of outside and inside influences, and this disc is a prime example. –Tom Orr
Temple Gong Recordings buy now
Posted by The Process at 7:14 AM No comments: 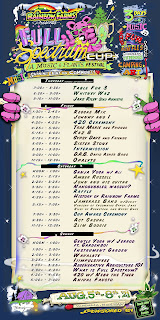 Posted by The Process at 6:50 AM No comments: 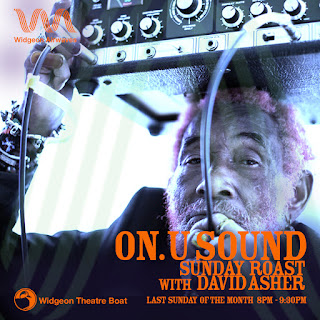 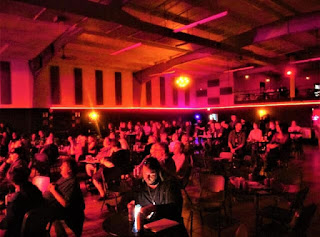 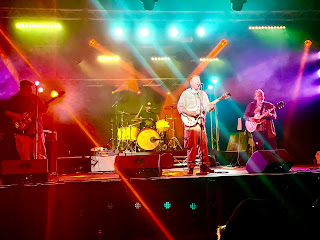 Platinum record producer Bernard Terry passed away unexpectedly yesterday. Bernard produced and mixed The Process Craven Dog album, and The Lion Of Judah Hath Prevailed, The Process meets Ghetto Priest. Bernard was a friend and a mentor to many. He was truly a genius. Rest well BT. 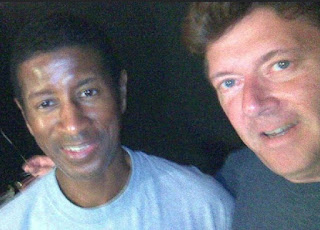 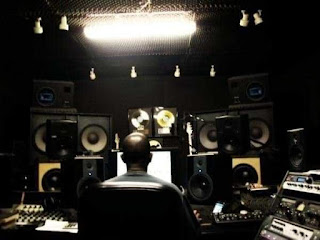 Bernard Terry in his studio.
Posted by The Process at 5:29 AM No comments: 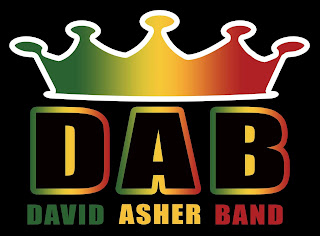 Now streaming: "Former THE PROCESS vocalist and Michigan reggae promoter/performer, David Asher from DAB lays out the info on his new DAB David Asher Band album, working with some of the On.U Sound Crew, and more.

On the Michigan Music History Podcast. Check it out!

Posted by The Process at 7:39 AM No comments: 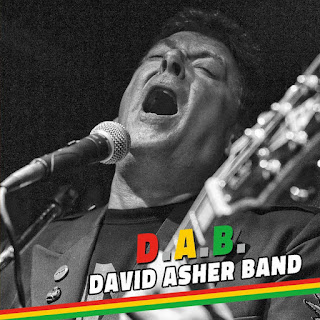 Set for physical release on January 1, 2021, to get the new year started off right, is the self titled debut LP from D.A.B. (David Asher Band). Hailing from Detroit, MI, David is no new-comer to music making, having spent over 30 years leading reggae / rock band, The Process.
The group consists of David Ivory on guitar, William Petzold on bass, organ and backing vocals, Derick Davis on drums & percussion, and David Asher handling vocals, guitar, piano and various other roles, as well as various guests and contributors, including U.K.'s legendary dub-master and producer extraordinaire, Adrian Sherwood.
A version of Curtis Mayfield's "Keep On Moving" gets things started, followed by a Gregory Isaacs cover, "Give A Hand" featuring guest, Mike Cooper, on lap steel guitar. An awesome remake with a brief taste of David's raggamuffin lyrical flow.
"47 Shots (The Ballad Of Milton Hall)" tells an all-too-common story of unjust death at the hands of law enforcement. This particular story is about Milton Hall, a mentally ill man who was killed on July 1, 2012 in Saginaw, MI for stealing a cup of coffee, no federal charges were filed against the nine officers who fatally shot him 11 times, as is too frequently the case when it comes to police brutality. One thing that I love about reggae music is the social consciousness, and the artist's ability to tell dire tales of reality, strife and desperation, bringing attention to injustice while simultaneously emanating positive vibes and soothing the soul... the horn arrangement by Nicholas Peña greatly contribute to that juxtaposition on this tune.
Another cover, and a childhood favorite of mine, "Knockin' On Heaven's Door," written by the great Bob Dylan, is the next track, in a rub-a-dub style.
"Keep A Little Faith" is a David Asher original and the first tune released on the D.A.B. ReverbNation page, an uplifting message to hold tight, especially during these trying times.

"Deputy Dawg and the Marshall" is an original, co-written by William Petzold, and another real-life tale of violence committed in the name of the law.
The most unique cut on the album, to me, is "There's A Fire," written by Asher. The down beat drives the tight, electronic feel of the rhythm and the percussion and horns are, well... fire! Heart-felt lyrics top it off quite nicely, too.
"Donkey Jawbone (On-U Sound Mix)" was originally recorded by The Process in 1992, re-recorded and brought to Ramsgate for the mix by Mr. Sherwood. The CD includes an instrumental version, too.
The final tune is a lovers rock duet with Mikki Sound, "Love Ballad (On-U Sound Mix)" covers the Skip Scarborough written r & b hit for the reggae lovers. There's also an instrumental version of this featured on the CD.
Overall, the album is a solid debut and David continues to be an inspiration to CULTCHA Clash Outer National (it was his request that I review the 2016 The Process album, Who Is That Mad Band?, which was the impetus of establishing the "digital zine" aspect of C.C.O.N.). It will be available on vinyl, CD and digitally, pre-order at Bandcamp.

David Asher was recently a guest on Duburbia Podcast with Selecta J-Cut discussing the making of the album as well as the history of The Process, check it out below.
https://youtu.be/gfmyFDN0WDA
Posted by The Process at 7:40 AM No comments: 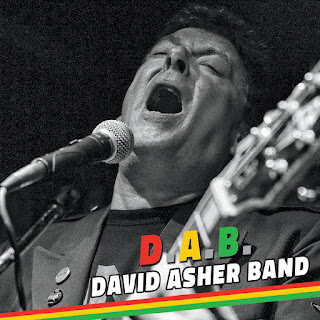 Former frontman for legendary Detroit reggae rock group The Process has, after much anticipation, released his first full-length album and it is unmatched in creative flow and artistry! Now under the moniker David Asher Band (D.A.B.), the self-titled debut album reflects Asher’s journey as an artist throughout the years. Recorded by Christopher Lewis at Fire Hyena Studios, the album further features two standout tracks mixed by the legendary British producer Adrian Sherwood (of On-U Sound Studios), who recorded and mixed revolutionary music from bands such as Nine Inch Nails, Depeche Mode and reggae pioneers such as Lee “Scratch” Perry.

David Asher believes the magic of his new vibration is truly a shared effort between him and his bandmates. And, Top Shelf agrees — the boys are soaring with it!

Asher takes the helm on guitar, lead vocals and piano, while guitarist David Ivory leads on the guitar marvelously, Derrick L Davis puts his stamp on the drums and percussion, and William Petzhold holds down the bass (on top of co-writing my personal favorite single on the album “Deputy Dawg and the Marshall”). The essence of the work in its entirety is captivating, mysterious and artistically timeless.

The album consists of five original songs, which follow an organic rootsy style, masterfully interlaced with four well-known covers that weave and blend together the feel of the entire project. This creative collaboration and mix between the old and the new really embraces what roots reggae is about, while maintaining a fresh and unique style that showcases everything standout-ish about more modern rock, alternative or other musical genre mixes.

“We planned on doing a cover album and I hadn’t written much in quite some time, but then I got bit by the writing bug and we decided to mesh the originals with the covers. As Jah intended, the project happened the way it was supposed to happen and, all of a sudden, inspiration fell into my lap,” says Asher.

While D.A.B.’s cover work of notable songs — like Curtis Mayfield’s “Keep On Moving”, which kicks off the album, and a killer reggae influenced cover of Bob Dylan’s “Knocking On Heaven’s Door” –definitely require praise, I was most intrigued and impressed by the raw and upfront emotive storytelling in the original tracks, such as “47 Shots (The Ballad Of Milton Hall)” and “Deputy Dawg and the Marshall”. The former is an anthem about the shooting of Milton Hall, who was a mentally ill black man that was shot 47 times after being unable to pay for a cup of coffee. This chilling true story is poetically matched with mind-blowing brass instrumentals of trumpets, flugelhorns and saxes by Nicolas Pefla that build the story’s suspense and heartache.

The track “Donkey Jawbone”, originally recorded by The Process back in 1992 on their Baldhead Vex album, also makes a new statement with D.A.B.; Asher never thought the song was given justice, so he re-recorded the track for greater distinction. Other noteworthy originals on the album include “Keep A Little Faith” and the dancey, dare I say, smoothtown-groovetown number “There’s A Fire”.

Like many insta-favorite albums, D.A.B. hit some heartstrings throughout.

Yet, the beautiful closing cover of the R&B classic “Love Ballad” (originally by Skip Scarborough) is so full of power and grace, it deserves special remembrance. The melding of Asher’s deep full vocals with Mikki Sound’s crisp sultry vocals balances this one out effortlessly, making the song feel both classic and sexy. The cherry that tops this tantalizing banana split for your ears are two additional bonus tracks mixed by Adrian Sherwood at On-u Sound in England. Feast your ears on the new album available exclusively on Bandcamp below! 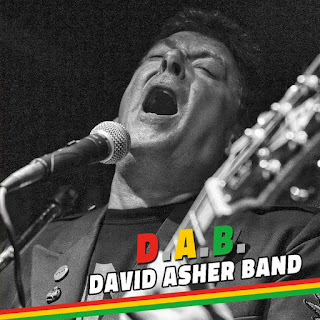 Posted by The Process at 7:14 AM No comments: