THE PROCESS – Who Is That Mad Band? Review on DMME

Michigan warriors shake the spear of Rasta to make their stand and stay their ground in the face of fate. 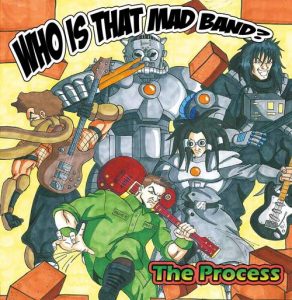 You don’t have to descend from Jamaica to live by the principle of ital, and these Detroit folks have been proving the point for more than quarter of a century. “Who Is That Mad Band?” might be the group’s best offering to date, though, the fact stressed by presenting new versions of a couple older tracks here, so don’t be fooled by the album’s title and its cover: it’s the message that matters, not the form, and not for nothing references to herb were dropped now in favor of much holier smoke.

For all the collective’s merry stance, the laughter leading into of “Mystery Babylon” is a bitter one, and the pain is piled up high from the very beginning – thus that the band’s cosmic take on “Dear Mr. Fantasy” sounds like escapism into a dream – but they somehow eschew, even in the most roaring riddims and rhymes, the righteous rage the others would opt for. There is ire under “Fire Is Burning” and smouldering coals in its all-encompassing dub restyling at the end, yet the anger is shaped as a prayer: that’s why “The Lion Of Judah Hath Prevailed” trades it for acceptance of triumph.

The humor is here, too, what with an acoustic calypso of “It Is No Secret” which Garrick Owen adorns with exquisite six-string lace, or “Time Has Come” where David Asher’s silky voice shines in lyrical rays. Still, the update of classic story in “Dr. Jekyll And Mr. Hyde” that is spiked with Dick Wagner’s solo, one of the late guitarist’s last cuts, turns into a slice of social satire, with skank and a smile, to alleviate its moral angle, while the riff and infectious chant of “Gypsy Wind” up the rock game immensely. And though the toasting of individual Wailers and other proponents of Jah music in “Tribute (To The Heroes)” is saved only by its sincere seriousness, “Return The Treasures” – one of a few Adrian Sherwood’s mixes on display – is a festive, if culturally sharp, gathering of various generations, as Lee Perry, Ghetto Priest and Little Axe all cut into the drift.

So yes, the band may be mad, but it’s often the madmen who tell you the truth.

Dmitry M. Epstein
http://dmme.net/
Posted by The Process at 4:48 AM No comments:

This Friday! Radio On​ Presents: The Wirebender presents the Process
October 28th 20:00 hours UK time, 3:00 PM Eastern Standard Time..
"The Show features interviews with Skip McDonald, Little Axe​ and David Asher,
THE PROCESS recorded in Detroit/London.
The interviewed is followed by mixes from the On-U Sound Records​ vaults, David Harrow​ and Adrian Sherwood at the controls and the Rex Offender providing some dub mash ups.
In the last part we have Adrian Sherwood with Nissenenmondai recorded live in Japan.” 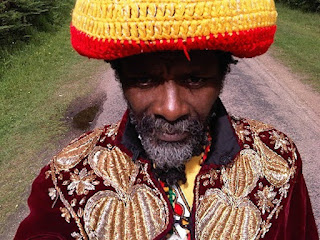 Ras Seymour McClean
The show starts with an interview. Simon Wade calls in from London. David Asher and Skip McDonald answer the call in Detroit. Chicago? What is the reason that such a long-distance connection should be established?
One clue to the answer is Ras Seymour Mclean. He is also the gentleman in the picture above.
And the following is part of his story, word to Simon:
#Return The Treasures”  featured in the Wirebender’s show the album by THE PROCESS, “Who Is That Mad Band?”, was inspired by the tireless work of Ras Seymour Mclean, in his efforts to return the treasures of the fortress of Magdala in Ethiopia, which was looted by the British in 1868, back to the land where they belong. The holy relics and crown jewels are held to this day, in the British National museum.”
The content of the show: ‘Return The Treasures’ features Skip McDonald aka Little Axe, Ghetto Priest, Mikki Sounds, Adrian Sherwood and the voice of the mighty Lee “Scratch” Perry.
The Show features interviews with Skip Macdonald Little Axe and David Asher The Process  recorded in Detroit/london.
The interviewed is followed by mixes from the On u sound vaults  David Harrow and Adrian Sherwood at the controls and the Rex Offender providing some dub mash ups
In the last part we have Adrian Sherwood with Nissenenmondai recorded live in Japan.”
www.radio-on-berlin.com
Stream the show on Mixcloud!

Posted by The Process at 8:00 AM No comments: