THE PROCESS IN CONCERT AT THE VASSAR THEATER SAT MARCH 22ND 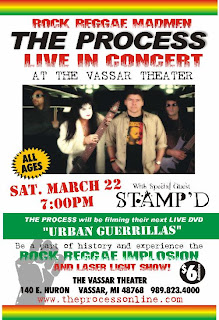 FOR IMMEDIATE RELEASE
For more information contact:
Fifth Avenue Media
David Asher
davidasher6@sbcglobal.net
989-598-4122
Fifth Avenue Media Presents,
THE PROCESS Live In Concert.
Vassar, MI.
February 6, 2008 - After years of performances across North America, Internationally acclaimed Rock Reggae Band, THE PROCESS, will perform their first hometown show in over 15 years on Saturday, March 22nd at the gloriously restored Vassar Theater.
THE PROCESS, recipients of a 2007 Detroit Music Award for "Outstanding Reggae Group", is also in contention for three 2008 Grammy Award Nominations, including, "Song of the Year" (Rasta Soldier, Radio Edit),"Pop Instrumental" (Metarons Cube) and "Vocal Performance by a Group Or Duo" (Rapdown, Extended Mix).This special live performance by THE PROCESS will feature a state-of-the-art Laser Light Show and be filmed for an upcoming DVD release that highlights the band’s remarkable 17-year career.
Joining THE PROCESS for this must see performance is special guest, "Stamp'D", a band who's music features a blend of Jamaican Reggae and Ska, with a full horn section, as well as an upbeat rock sound. The beautifully restored Vassar Theater, located at 140 E. Huron Rd in Vassar, Michigan, is very excited to present THE PROCESS as the first live entertainment to grace its' stage since 1991. This will be an all ages’ show.
Tickets available in advance or at show time at the Vassar Theater Box Office.

Posted by The Process at 7:15 PM No comments: