ASCAP selected David Asher and Garrick Owen of THE PROCESS as recipients of an ASCAPlu$ award. The purpose of this special award, which has been given each year since 1960, is to reward writers whose works have a unique prestige value for which adequate compensation would not otherwise be received, and to compensate those writers whose works are performed substantially in media not surveyed by ASCAP. This is the 5th year in a row that the duo has been nominated by the society.
The award brings cash and recognition to Asher and Owen, the primary writers of THE PROCESS.
Posted by The Process at 4:28 PM No comments:

From an email from the the http://www.freepress.net/ website.
Bust Big Radio Payola
Dear David Asher,
Ever wonder why commercial radio has become a mind-numbing repetition of the same songs by Jessica Simpson and Celine Dion? It's not just you. Corporate radio in every town has become a wasteland. And in many cases, it's a crime.
An investigation airing tonight on ABC News "Primetime" exposes illegal payola across the radio dial. Radio conglomerates that control hundreds of local stations are taking bribes to endlessly spin major label acts, keeping independent artists off the air.
FCC Commissioner Jonathan Adlestein calls big radio payola "potentially the most widespread and flagrant violation of FCC rules in the history of American broadcasting." But the FCC's Republican leadership remains reluctant to crack down against the corporate radio giants that have sold off our airwaves.
Tell the FCC to Bust Corporate Radio Payola
This new age of payola is the product of consolidated radio ownership. Several of the largest radio conglomerates in America -- including Clear Channel, Viacom/CBS radio and Cumulus -- are among those now under subpoena in a criminal investigation by the New York State Attorney General Eliot Spitzer.
Spitzer has exposed a shadowy network of promoters hired by the recording industry to launder hundreds of millions in cash and prizes each year, lining the pockets of big radio broadcasters who agree to spin corporate acts nationwide.
"They thought the FCC was asleep, and they shot someone in front of the policeman," Adelstein tells ABC News. "The policeman is obligated to act when evidence is so clear."
Tell the FCC to Stop the Abuse of Our Airwaves
The airwaves belong to the public -- not the media companies with the fattest wallets. Any broadcaster in violation of payola statutes could face severe FCC sanctions and even the loss of their broadcast licenses.
But the FCC won't act unless they feel pressure from you. Please take action today.
Onward,
Timothy KarrCampaign DirectorFree Presswww.freepress.net
P.S. Activists, musicians, students and independent broadcasters are joining with Free Press to stop payola and reclaim the public airwaves. Learn more at www.freepress.net/payola.
P.P.S. Want to do more? Wisconsin Sen. Russ Feingold has introduced a bill to stop record labels from paying off radio stations in exchange for airplay. Urge your senators to co-sponsor the "Radio and Concert Disclosure and Competition Act" (S. 2058).
Posted by The Process at 4:42 PM No comments:

Preview 4 tracks from the new CD. 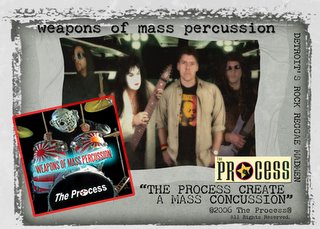 Preview 4 tracks from the new CD
at PURE VOLUME.

THE PROCESS article in Review Magazine 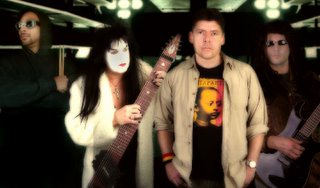 Pre-release reviews of the new CD by THE PROCESS are starting to appear. Check out the interesting article by
Lauren Davis in Review Magazine.

THE PROCESS: Weapons of Mass Percussion Newest CD Release Marks Continued Evolution from One of Mid-Michigan's Most Prolific Bands
By Lauren Davis

If you asked founding member David Asher of "The Process" how he would sum up the last 15 years, he would likely tell you it's been a great ride. He would also immediately remind you that it's just getting started.
With a hard-hitting mix of rock, rhythm, techno, and dubbing, the band is preparing to release its seventh self-produced album to fans that have come to expect the unexpected.
There is an old saying that a person's perception is often their reality. With "Weapons of Mass Percussion", The Process challenges the perception. It's an eye-opening trip through the status quo that draws attention to the way we view our society, our potential for ignorance, and our subjective sense of bliss.
This is not a project bent on swaying opinion. Rather, "Weapons of Mass Percussion" is a testament to a musician's ability to call traditional thinking and norms into question. In a politically correct world, The Process is not even close to fitting in and they wouldn't have it any other way.
My first encounter with the new CD is the title track; A dub mix of sound bytes from our favorite government misfits. It's akin to a smack in the face with the blatantly obvious. Both astute and amusing, the montage of political rhetoric falls right into the adept hands of the musicians crafting the backbeat. Its defining quality is not just its willingness to "go there", but to do so with a wink and a nod at the ridiculousness that often befalls the empowered.
If it seems to the average individual that stringing together a bunch of soundbytes into a powerful musical arrangement is taking some shortcuts, consider the thought behind it:What you hear is an audio snapshot of all of the things we are either too overwhelmed to contemplate, or too disgusted with to challenge. "Weapons.." manages to make its point without driving it too far over the top. Because he considers it a far less "mainstream" piece of work, David Asher describes this album as a "departure" from traditional Process releases.
I call it an evolution.
In today's entertainment world, it's not easy to be a do-it-yourselfer. But Asher describes the challenges of being a self produced band in a corporate musical environment with some degree of nonchalance. The Process has done it for fifteen years, and, he says, it never gets easier. "It's like going to battle. We have to push, and promote, and produce, and do all of those things that we did when we first started out. We face a lot of challenges every time we put something out there. But we believe in ourselves, and having friends and fans (who) support and believe in us really helps".
As one would anticipate, the fan base has changed over the years without the help of corporate entities, thank you very much. When asked if outlets like www.reviewthisradio.com, and the underground music scene, in general, have helped to develop the band, Asher answers before I finish the question.
"The fan base? It's broadening across all demos. The explosion in the underground music scene, especially on the Internet, has helped a lot. I mean, I'm recording songs that have been around since the time of King David. I'm really just a conduit for what's really out there. But I get letters and e-mails from Japan, Europe, South America all over the world. It's amazing!"
Would a band like The Process ever really acclimate to a corporate label? Asher doesn't think so. "Corporate Support is great when corporate actually supports you. But most of the time, what they do is support you for a time, and then hand you a bill after it's all over (or when they determine you're done) for 'talent development'. We just want to keep creating."

Though The Process has the support of talented studio producers like Gee Pierce, and some quality promotional people with whom they work closely, the band still maintains control over their product. They have also managed to keep ownership of their library: Something even the most successful artists have regretted signing away.
Retaining creative control has given The Process a certain level of freedom to explore more drastic changes in their musical approach. David Asher excitedly tells me about how, four years ago, adding a new drummer with strong African influence led them to explore other avenues.
He describes it as a major turning point. Following their sixth release, "Blood & Bones", The Process immediately began working on the new project. "We never left the studio," he says. "We've done re-mixes on various tracks that are so different they're essentially like new. Our new drummer gives different techno vibes, rich rhythms, and a very real, new feel to everything. It's a lot of fun!"
Though wildly popular overseas, dub music is still taking root in the states. So how do you define it, exactly?
"It's the influence of turning music around using what's out there in new technology. It got more creative by taking western rock instruments to make African music." Though as the genre expands, admits Asher, " It's become more bionic and technological."
For that very reason, the techno approach sometimes has more traditional musicians struggling with the age-old battle of craftsmanship vs. technology. How does a band like The Process answer critics who view a synthesized/dubbed product as, while certainly creative, not necessarily musical in nature?
It's a tough question, but he takes it in stride. "I would point out that my guitar player, for example, is a highly skilled musician featured in many industry mags, and widely viewed as one of the best. I have a drummer who can play circles around any rhythm you throw at him. My whole band, these are quality players. And they find plenty of ways to express themselves in what we do".
But of the musical merit, itself? "I understand the question" he says honestly, "But you have to embrace the new technology, and move forward with it. It's part of the creative process. For example, The Beatles heard a synth and immediately put it to work for them." Taking the technology to new heights, explains Asher, "Šis what makes music evolve."
Still, he seems to appreciate the value of more traditional timbres. "We try to bring a warmth and an organic feel to what is a fairly cold, technological arena. To juxtapose that is a great challenge. You know, it's a tough balancing act being true to yourself, and being something marketable. A good man once said 'By what do you measure your success? Becoming a flash in the pan, hoping for more? Or is it the ability to keep pushing and creating?' We're out there pushing, for better or worse, and it's really what it's all about. As long as we can keep doing it and be true to the effort, we're good with that."
In the decade and a half it's been making music, The Process has seen his share of challenges, frustrations, and successes. I ask David, "If something were to happen tomorrow, and "Weapons of Mass Percussion" were to be the final word from the band, what would the overall message have been?"
"It's all peace." He says. "And it's okay to be a warrior for peace." He brightens as he adds, "I see the future though, and after seven albums, it's still forward to the best of our abilities.""Is there anything you would have done differently?" I ask.
The question seems to catch him off-guard. After a long moment, he answers, and I can hear him smile through the phone. The response is slow, and somewhat introspective. "What would I do differently?" He muses.
"Nothin'. Not a thing. I'm doing the same thing (taking the same approach) as I did back then. I've just become a little better at it."Another long pause and then:
"...Rastafari flows like a river. After fifteen years? It's a soul refresher now."The Process will be at Shooters headlining the annual Bob Marley Birthday Bash and releasing their new CD, Weapons of Mass Percussion on Saturday, February 25th, and is a featured artist on Review This Radio Dot Com.
Posted by The Process at 4:36 PM No comments: 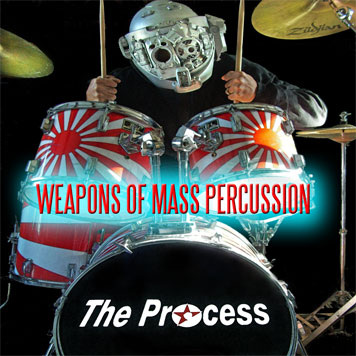