THE PROCESS LIVE on "The Mitch Albom Show" 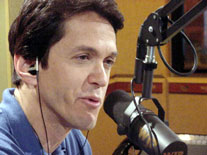 THE PROCESS performs live on "The Mitch Albom Show" Thursday March 30th.
The Program which airs 5-7 p.m. Eastern time, is now in its ninth year.
Broadcasts originate from ABC-owned flagship station WJR-AM in Detroit, a 50,000-watt station that reaches 38 states and much of Canada.
Posted by The Process at 5:56 PM No comments:

Watch THE PROCESS Video on MYSPACE 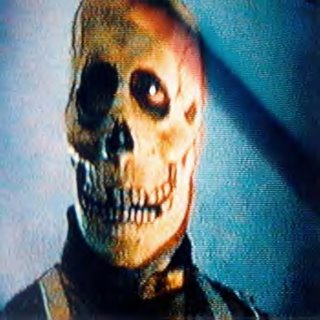 Watch THE PROCESS Video Beggar on MYSPACE.
Detroit's rock reggae madmen, THE PROCESS, go from New York to LA in this adventure in the life of a street person. This Award winning video takes you with the band to the Holland tunnel in New York, on to Al's Bar in LA, and back to Detroit again. THE PROCESS tell the story of a homeless person with a wild montage of images and never before seen concert footage.

CLICK HERE to watch the video!
Posted by The Process at 4:08 PM No comments: 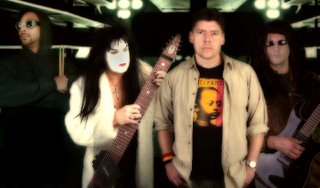 Sixty-one years after his birth, and 25 years after his passing, the life of reggae artist Bob Marley continues to be celebrated -- and not just in the Rasta-man's native Jamaica.

Saturday, Shooters, on Gratiot Street in Saginaw, will host its annual Bob Marley Birthday Bash. Headlining will be The Process, a Detroit-based rock/reggae outfit with mid-Michigan roots. The Saginaw ska band Stamp'D will open, and Ambassador David from Reggae Ambassador Worldwide will serve as DJ.
"Put on your dancing shoes," advises a news release from Ambassador David, "and come ready to party."
First to send you to the floor will be Stamp'D, which began as a Saginaw trio in 1996 and has blossomed into its current horn-enriched seven members, several of them from the Birch Run-Saginaw area.
Saturday will be the first public performance for the band's new lineup.
When founding member, guitarist and lead vocalist Phil Garno moved to Texas several months ago, sax player Seth Payton stepped up to the frontman and vocalist role, grabbing a guitar as well as his horn.
"I'm excited, and a little bit nervous," he said of the brighter spotlight. "But we're still the fun, happy, rock/reggae/rhythm outfit."
They're known as a "ska" band, specialists in the Caribbean-based music that, mixing its genetic material with slower, more vocal "rock steady" music, evolved into reggae.
"Like reggae, ska is roots music," said Payton, "about freedom and oppression. But it's not always making a political statement. And no matter what it's talking about, it's still feel-good music."
Ambassador David notes that Marley, best known for reggae, made three ska songs his first recordings.
Payton calls his band's music "third-wave ska." First came the Caribbean original, then a second wave from enthusiasts such as the English Beat and The Specials in Great Britain.
The third wave keeps the basic concepts, including a moving bass line and guitar and horn notes on upbeats, but adds a rock-driven feel.
Along with Payton's move to center stage, other lineup changes have taken place, "as people get older and move on with their lives," he said.
Remaining are longtime members and current Saginaw residents Billy Filter on drums and Jim Garno on bass, and Birch Run native and East Lansing resident Matt Wesener on guitar, percussion and synthesizer.
New to the band are trombonists Tim Horenziak, a Birch Runner now living in Caro, and Joe Greer of Saginaw. Former member Justin Comerford of Saginaw will sit in on trumpet Saturday night, while Payton continues to seek one or more band members on that instrument.
For the band The Process, the event is a twofer: they're headlining the Marley celebration, plus launching their seventh self-produced CD, "Weapons of Mass Percussion." The new disc was produced by veteran Gee Pierce.
Asher, never one to shy away from politics as ammunition in a musical war for peace, says the new album calls on memories of all the things that have happened since September 11, 2001: "This is a snapshot of everything you couldn't process then."
The title cut, for example, features sound bites of politicians, including President George W. Bush saying of insurgents, "Bring them on."
The band has been in business for 15 years: music meets technology, organic meets technology. It works in musical forms including rock, rhythm, techno and dub, the latter a Jamaican musical form that features plentiful sound processing.
Overlaying music in diverse forms and sounds from outside the musical sphere has become simpler, said Asher in a phone interview. "What used to take all day with a huge stack of hardware can now be done in minutes with software.
"Some of this is so essentially remixed they're like entirely new tracks."
The Process comprises Asher, Bill Heffelfinger, Garrick Owen and Gabe Gonzalez, the latter a former member of George Clinton's P-Funk All-Stars who, besides laying down a variety of rhythms, provides live remixes.
At last year's Detroit Music Awards, Asher was named "Outstanding World/Reggae/Ska Songwriter," while his band received nominations in four additional categories.

Posted by The Process at 3:14 PM No comments:

These pictures were taken by friend of THE PROCESS Rick Moreau at the Release Party For Weapons Of Mass Percussion on Bob Marley's Birthday at Shooters in Saginaw. 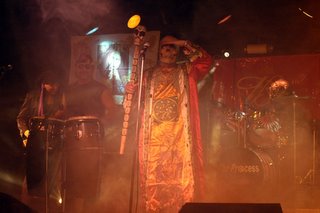 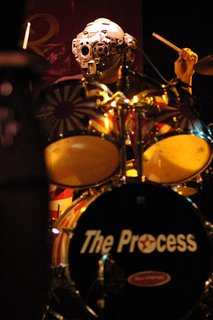 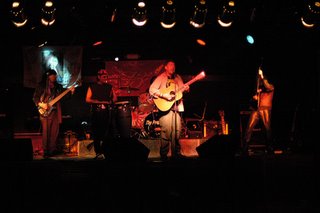 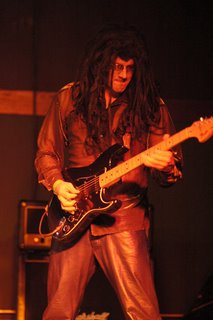 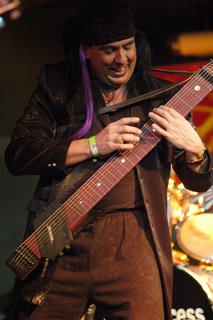 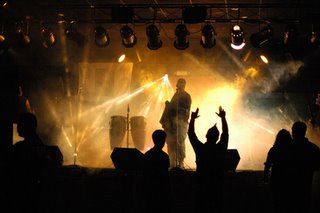 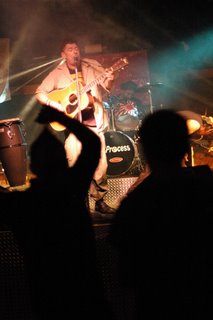 Posted by The Process at 8:35 PM No comments: