By J.P. Ribner
Original Roots-Reggae Music
From Saginaw Michigan IS a Thing! 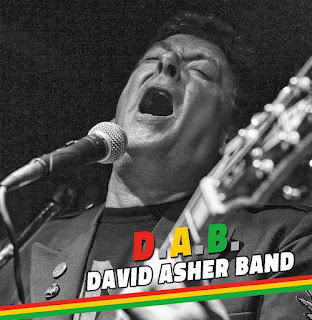 TL;DR: This is absolutely amazing music and you need it in your life!
Back in my day as a local Flint punk rock singer, I heard tales of David Asher and his band, The Process. In whispered hushes, fans told me about this enigmatic frontman. I mentally pictured a mysterious and shamanic wildman casting a musical spell. Everyone had the same message of, “Go see them. You won’t be disappointed.” Sadly, the stars never aligned to allow such a thing to happen. Years later, I came across this release by the David Asher Band (DAB). Once I confirmed that this was the same near-mystical David Asher, I bought a copy. I’m damn glad that I did, too!

Okay. Full disclosure, I’m not big on liner notes. I’ll keep things tight by summing up DAB as a group. It's nothing short of an amazing collective of talented Michigan musicians. They've come together to deliver these amazing and memorable songs. Let’s start with the cover tunes on this album:

2. "Give A Hand" by Gregory Isaacs

In short, DAB masterfully aces all these cover songs. And in doing so, they achieve what few local bands do in this regard. DAB masterfully strikes a balance between honoring the original and making the songs their own. The standout is "Love Ballad." David and guest vocalist Miss Mikki Sound create a soulful ballad atop a great jam from the band. The track is as smooth as silk, and every bit as evocative of any of the great soulful love duets of the 70s. Perhaps even better. (If this song isn’t used in a future movie or TV series, a great injustice will be done to music fans and DAB.

Bravo to David and the band on the covers! Now, I’m excited to change gears to what really attracted me to this release: the band’s original music. Let’s take a look at this body of work track by track:

1. "47 Shots (The Ballad Of Milton Hall)" - Reggae wouldn’t be reggae without a protest song. This number is DAB’s contribution to the genre. In it, Asher shares his take on the tragic case of Milton Hall, a man killed by Saginaw police. Like the title of the song suggests, Mr. Hall was shot 47 times. DAB transforms its righteous fury into a tune that moves and grooves with a funk all its own. The band’s razor-sharp musicianship and Asher’s soulful vocals are on full display here.

2. "Keep A Little Faith" - The world can grind us down and we could use a musical pick-me-up. DAB delivers here. This upbeat number shares a kinship with Bob Marley’s “Three Little Birds.” That said, this tune maintains more than enough originality to stand on its own. Each note of this inspirational number leads us to a promised land of tranquil positivity.

3. "Deputy Dawg And The Marshall" - I don’t know the story behind this song but I’m sure it’s an interesting one. What I can say is that all of DAB’s strengths are on display here. Excellent storytelling and singing combine with music as warm and rich as honey from the jar. Highlights include a background vocal arrangement, rap monologue, and humorous tribute to “The Good the Bad and the Ugly.” DAB pulls these elements together to forge a song that’s as fun as it is catchy.

4. "There's A Fire" - I’m a lyricist at heart, so it came as a shock that this one was the standout for me. I say that because “There’s a Fire” is not lyrically complex, but that’s NOT a bad thing. The fire Asher sings about is his burning passion for his music. You'll be warmed by the heat from that inferno within the confines of this catchy number. This song is a dance number and a damn fine one at that! If you don’t hit the dance floor while it's playing, then you don’t have a pulse. It’s as simple as that.

5. "Donkey Jawbone" - This song makes a great showpiece for Asher’s powerful vocals. I almost feel guilty for saying it, though. It could appear that I’m slighting the other hardworking members of DAB. Rest assured, I'm not. The band is on point here too. And its inspirational message encourages the small to stand up to the mighty. DAB’s signature hypnotic flow state is on full display. So is the group's ability to rise above the current to showcase excellent workmanship. Musically, this number covers a lot of ground while being rooted in something exceptional. Sit back and enjoy!

6. "Donkey Dub" - I’m no reggae purist. I am a lover of great music, and THIS is it! The song is mixed by legendary British Dubmaster Adrian Sherwood. Based on a solid melody, the horn section melds with its a slinky bassline, steady drums, Caribbean poly-rhythmic percussion, and echoing guitar and clavichord effects. The result is a jam that's powerful and hypnotic. If you’re looking to travel deep into your inner space while your body sways and moves to the beat, this is your ticket. Enjoy the ride!

All in all, this is a great album for reggae AND all-around music fans. Normally, I'd tell you to “support your local artist” by buying this release. I’m not going to that here though. Too many reviewers fall back on the local angle in hopes of selling sub-standard art. DAB’s great work here is easily good enough to be on a NATIONAL level. Get it for that. Like I said above, you need it in your life.

David Asher is a great front man, singer, songwriter. I am glad I have had the privilege to entertain with him. He used to do a great job for me at my nightclub. Thanks David